Award presented at the 3rd Annual Student Optometric Leadership Network (SOLutioN) Leadership Conference in Houston, TX
Las Vegas, NV., April 27, 2013 –The Student Optometric Leadership Network (SOLutioN) is an organization composed of optometry students from across the country whose goal is to cultivate leaders in private practice optometry.  At the annual SOLutioN conference, representatives from each of the schools and colleges of optometry in the U.S. and Puerto Rico met to decide who would be awarded The Preston Cup.

The Preston Cup began as a tribute to Preston Smith, a fourth year student at Northeastern State University Oklahoma, College of Optometry (NSUOCO).  Preston was a founding leader of SOLutioN but tragically past away in a motor vehicle accident in 2011.  To honor Preston's drive to promote leadership in private practice optometry across the nation, The Preston Cup was created. 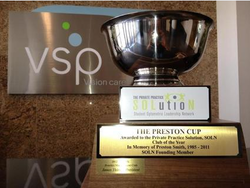 The Preston Cup trophy was donated to SOLutioN by VSP

To learn more about SOLN and the Preston Cup, email soln.information@gmail.com.

During the academic year, SOLutioN members from each school brought in guest speakers, had fundraisers, toured offices and held networking events with local optometrists to promote and provide insight on private practice to optometry students.  In the months prior to the annual meeting, SOLutioN members from each school voted for the club that advanced business education the most over the past year. The top finalists presented their accomplishments at the annual conference and although it was a very close race, in the end the Student Optometric Practice Management Association (SOPMA) from the University of Houston, College of Optometry received the honor and privilege of taking home The Preston Cup.